This is possibly the dumbest fanfic ever. Also, you're going to want to have google translate open.

Natani stood in front of the mirror. She wore nothing but her shorts and bindings, and the latter was getting annoying. She had tied them wrong that morning and they'd been chafing against her armpit all day. She reached behind her and slowly undid the magical wraps. Keith walked in, flopping on the bed after a long day of sparring.

"What?" Keith was confused.

Keith sat up on the bed. "Natani," he began slowly, "what is my name. Slowly."

Keiths eyes widened. She wasn't speaking gibberish. It was... a language of some sort.

"Natani, how many languages do you speak?" He questioned.

"Une," she returned, holding up a single finger to make herself clear. He was only makeing her more confused. "Pourquoi pose-tu cette question?"
"One, huh?" Keith pondered this. "Well, I think you might know another."

"KEITH!" Natani burst, figuring it was time to end this joke. She grabbed his arms and forced her words into his face. "Je. Parle. Keidran. J'ecoute ca, tu ecoute ca."

"Natani, plug your ears and say that again."

Mockingly, she folded down her hears and repeated her statement. "Je parle kei.... dran..." the dramaticism of her accent struck her. She could hear herself, but couldn't understand a word she was saying. She released her ears and said "qu'est-ce qui m'arrive?" Her words made sense, but as soon as she pushed her ears down her speech garbled into a mess of harsh consonants.

"Keith," she began, suddenly beginning to panic. Nobody could understand her! "Adiez-moi!"

Keith set about muttering, trying to figure out why his friend was speaking in a language that he had never even heard of.

Dang. Her new language was arousing her.

Approaching Keith from behind, she wrapped him in a bear hug and started nibbling on his ears.

"Ack! Natani! We talked about this!"

"What what that?" the red dude replied. "I don't speak Keidran."

"I wasn't parle en Keidran" Zen retorted, "Are you deaf or just dumb?"

The human slowly stood from his relaxed position, but suddenly turned flush and sat down. Zen noted the cause: Raine had emerged from the tent.

"Well, Maren and Karen are ok," she stated, obviously missing the previous, odd conversation. "but hopefully we can keep them awake for more th--oh, gross!"

"Your feet!" She exclaimed, "This nose make's them smell so bad! I'm surprised Zen's still alive out here!"

"What was that?" Raine replied, boggled by his statement.

"What was what?" He returned.

"That language you just spoke. Do you know bastian?"

"Say some more." Raine encouraged, and Red decided that whatever Sythe was doing was more fun then this.

"Zen, I know what you're speaking!" She exclaimed. "It's a language from an old story I read when I was little, about an alternate world many years in the future. There were continents covered in countries, and hundreds of languages. On of them was called francois, or francais, but anyways it's this really romantic language which uses all sorts of weirds consonants--"

"French!" She exclaimed, suddenly jumping. Zen was surprised by this sudden burst and even more so when her left foot came down squarely on his balls. "That's what it was called. I remember now, and... are you ok?"

Zen was whimpering and slowly turning blue. He nodded awkwardly, his nuts screaming in pain as she stepped off his crotch.

"Sorry," she murmured, embarrased because she had no idea what she'd done to him.

"Yeah," he gasped, his bound hands sheilding his dignity. Lucky Natani would never have to go through this.

"Perhaps that's where this new language is coming from?" He thought to himself. "Yo, Nat. You in here?"

"Zen!" Natani's voice rang throughout his head. "Thank the masks you're here. I'm speaking this weird language and--"

"Yeah, I know. It's called French, it's from some old story."

"Great, now how do I stop speaking it?"

"Woah!" Keith jumped at her words.

"What?" She replied, startled.

"I am? I am!" Natani jumped out of the bed, reveling in her old language. "That was so terrifying! Oh, I'm so glad I can talk again!"

Taking a deep breath, she sat on the bed, and Keith scooched beside her.

"Well," he began "let's hope I don't get assaulted by a wolf again anytime soon."

"You say that like you don't want me to." she replied, gently stroking the base of his tail.

Natani sighed. "Well, in the meantime you can teach me to speak human. I'm sick of not being able to communicate."

"Oh joy, first I'm an outcast, then a general and now a teacher. What next?"

"After that I want to learn to read and write. So I can flex on Zen!" 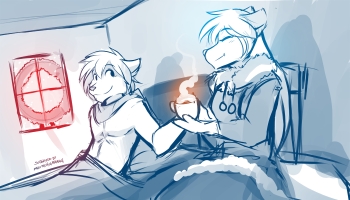 Interesting concept, suddenly learning a language you can't stop speaking. My high school French taught me just enough to understand most of that.

That said, it does beg the question: Of the four dialects known in Mekkan to date, how would somebody who knows them all react to a language they don't know? Keith has quite the response here for that...
Gearhead mechanic in the digital era, who will probably grow up is in the process of growing up to be a very grumpy old man.
Top

Después the premise being silly I like the implication that french jumped from some of this boks Rained likes to send and then to natani.

The idea of some magic meme/virus that spreads french via people. Well it is interesting a bit scary, after all uno no puede confiar en los libros en francés. But interesting and in this context seems quite funny

Also no matter how I try I can't imagine Nat speaking french without a femenine tone.
There are three things that motivate people: Money, fear and love.
Links to my ramblings:
Twokinds [of] data
PhpBB in the age of facebook
If you are new to this phpBB thing:
BBCode guide
Top

Most MEN can't speak French without at least a little feminine tone. Well, not that properly, anyway...
Gearhead mechanic in the digital era, who will probably grow up is in the process of growing up to be a very grumpy old man.
Top

Also no matter how I try I can't imagine Nat speaking french without a femenine tone.

Same for me, and I don't mind at all.

Return to “Story Board”