And now, a word from our moderators

One Two Three Four
Honestly I loved the beginning of the whole story, those first four comic pages.
The story was honestly really interesting when I first got into twokinds, it was new and simple but with so much plot just in that little start. Every pages was just more questions and I liked the old uncolored sketches a little more than the fixed ones Tom put up later on. He put so much into just those for pages that I would wait forever until the next one. Tom shows what just a little planning and script can do for an online manga.
Tom's artwork as well as his comic were the reason I got back into art.
The start of the comic reminds me of that.
TwoKinds Forum resident emo.
My Deviant Art
MyTumblr
My Youtube

For me, this panel adds even more depth to the characters, and shows how much their relationship has grown. Flora can hardly believe the trust that Trace has in her, it's an awesome page.

I personally owe this comic to the formation of one my best friendships, as we both read TwoKinds when we met. So even now we still wait eagerly for updates and discuss them when they arrive. Anyway, thanks Tom! :3
Top

I found this comic completely by accident 6 years ago and I have never missed an update. This is the greatest thing I've ever found. Thank you for creating such an amazing comic! This is definitely my favorite page! http://twokinds.keenspot.com/archive.php?p=465 Natani and Keith are my favorite pairing. They're so cute together!
Top

I was so happy to find this series a few months ago, I'm just on the edge of my seat for every update.

http://twokinds.keenspot.com/archive.php?p=361
This is my favorite so far, because it was one of the first big gender-benders and has really opened up a funny side-plot to the whole story. Absolutely love it. That being said, the main story is freaking fantastic as well.
Top

There are so much favorite sites at this comic. and I agree with the most sites which were choosen here.

By the way I choose one of the sadest parts as my favorite, because it really made my tears rolling.

Also if we all knew that this part of the story won't end well - I needed 1 or 2 minutes to calm down again. It is as sad like the Deathscene of Cheyenne in "Once Upon a Time in the West" - you know it would happen, but the last Scene shows the whole tragic.
Top

http://twokinds.keenspot.com/archive.php?p=499 this page. <= this. This is the page.

there are probably many pages I could choose from this chapter that would show why I love this comic so much, or what I even mean. But this page I think exemplifies the point the most.
This was the saddest moment for me while reading this comic. Alaric was forced to fight his best friend, whom he loved, whom was seen as a betrayer, whom refused to surrender when he himself had to combat him. Here, Alaric is at the last few moments of his life, he's desperately trying to come out with his forbidden love, hanging on by the thread's of Keith's shirt, and failing. And then subsequently falling.
Meanwhile on Keith's side, he's lost or is in the process of losing a lot of his friends. His only friend in the Basitin community's life is currently in his hand, and he slips. He fails to save Alaric's life and the sudden weight of the incident is being shoved on him. And yet despite this, he must go forward with their plan, otherwise it would fail.

I guess the reason why this was so much sadder to me was because, being gay, I empathized with Alaric. I knew how he felt trying to stay positive and hidden in a strict society, I knew how he felt when the one person he most wanted to be with would never be able to reciprocate those feelings. It made it just more sad when the poor guy had to face his target of affection in battle, and ultimately unable to be saved by him. The last words he says aren't even the ones he wanted so desperately to say. "I love you."

I hoe I win this random contest of random chance!

Hm. A lot of contenders for my favorite. There's this early one, showing Flora being extremely "free," for lack of a better term. I've always considered the Keidran's lack of a nudity taboo to be fascinating, a reminder of how they may be every bit as sentient as humanity, but simply aren't the same.

This is another good one, if only because I think I've had that nightmare. Trace's epic reply on the next page is a bonus.
Spoiler!
Or rather, Templar Trace's epic reply...
"The Friendzoning" was also high on the list, if only because it's the first time that Tom's evolving art style has ever made Kat's body shape and exposure an issue. (There was a rumor that this page had to be edited -- the text bubbles moved around -- to tone it down, but that's probably just reddit lore.) The fact that it went exactly the place I didn't expect it helped matters a lot, too -- I was all "yes, yes, YES.... NO~~~~~". Wherein said "No" continued for a few days.

You can almost HEAR the scare chord playing when he opens his eyes.

The glorious, albeit temporary, return of
Spoiler!
Templar Trace.
I think the insinuation it brings up is actually somewhat interesting:

Spoiler!
Even though he's still an unrepentant, horrible, dark magic addled racist monster... Templar Trace still cares for Flora. And the others, as we find out a few pages later.
Does that mean he's healing? Coming to terms with the disaster that befell him? That he's losing the battle? Or am I completely wrong about who is really handling the combat, there?

Who knows? It was creepy and perfect. The only thing that could have made it even more unsettling would have been red text on a black text bubble or something.

http://twokinds.keenspot.com/archive.php?p=385 It makes me smile ever time...
Top

comic number 255. it was the first Twokinds comic i ever saw, and what led me to track down the rest of it and start reading.
http://twokinds.keenspot.com/archive.php?p=255

http://twokinds.keenspot.com/archive.php?p=740 is my favorite page so far. I love the expressions and I was very happy to see Trace's positive reaction.
Top

My favorite page is 274, because that's when Kathrin was introduced!

So far the following strip has amused me the most: http://twokinds.keenspot.com/archive.php?p=737
Gotta say, I love the strips that contain a certain humourous aspect - this one is just a killer in that aspect ...
Top

i had started reading twokinds a couple of years ago and i got hooked and have red every update...i like this page of the comic because it shows the love between brother and what they did for each other.

I have been watching this comic almost religiously for ages now, at least 5 years, and what an epic Journey it's been! I think that one of my favorite strips would probably be this one: http://twokinds.keenspot.com/archive.php?p=503 simply because it seems to put so much in perspective for feelings and such, even if the characters don't know it themselves ;P
Top 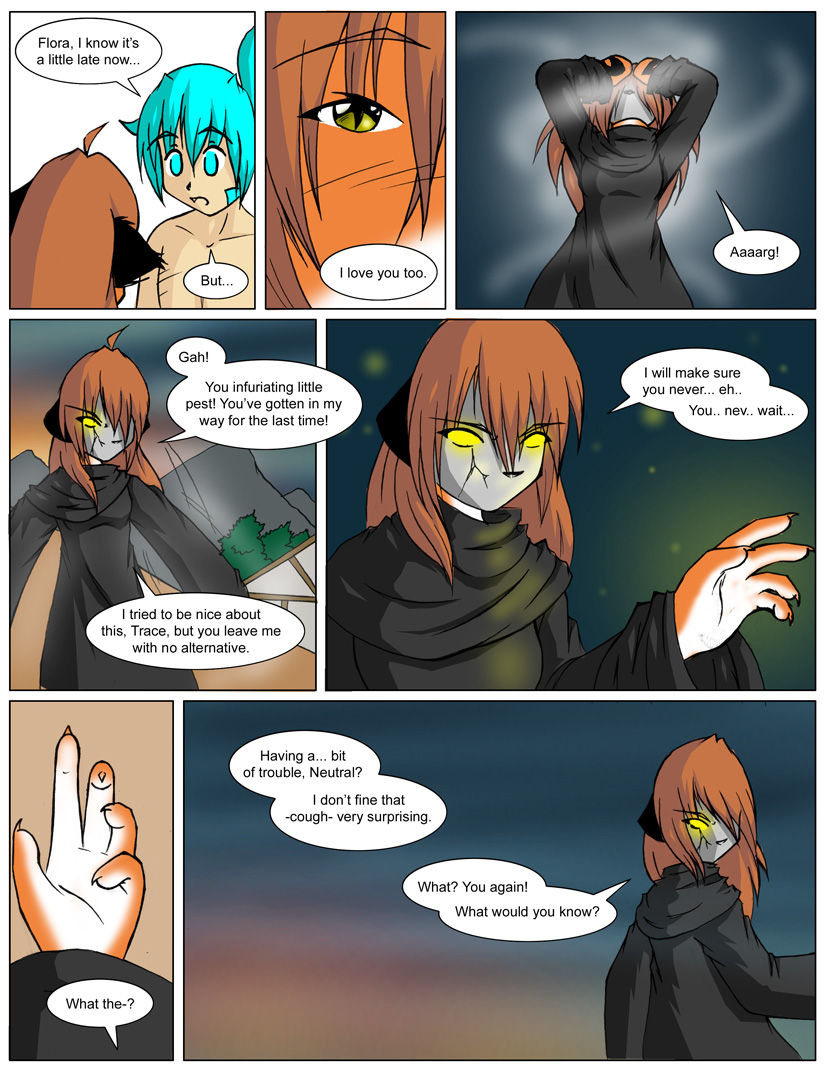 I'd been thinking on a couple of different pages, but ultimately, this one -- from Chapter 6-2, takes the cake. Honestly, this entire chapter is filled with lots of good ones, from comic relief Karen and Maren to EvilTrace and everything in between. The mood whiplash is quite severe, and it's not until you get to this page that you'll really know how to feel.

In my opinion, Tom, this is when your artwork really started to mature. The simplistic coloring left us to focus on the mood of the moment, rather than be distracted by things in the background. The blur helps us feel the trance-like state that Flora and Trace are both in.

It's been several years since I read that page for the first time, but I still recall it fondly. Let's hope you do, as well.

Magic is merely science that we have yet to understand.