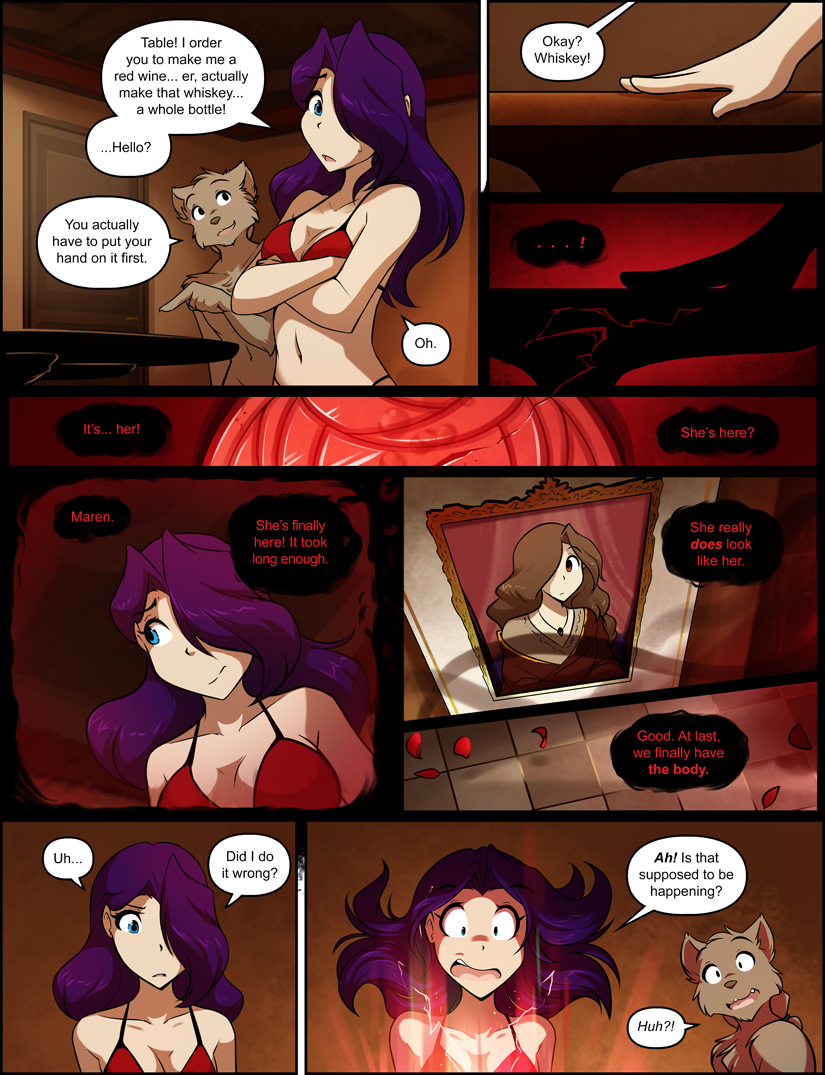 Spoiler! Hidden for the benefit of those who still don't know and don't want to be spoiled
Saria's body is sealed in a tank in the secret room. Trace seduced Maren in order to get a new body for his late wife. Saria's soul, or at least a ghost created with magic similar to Laura's is going to be forcefully stuffed inside Maren's body, so Trace can get Saria (or at least a good copy) back...
Top

I believe the wording should be "It took long enough." in the fifth panel.
Videre videnda.
Top

Okay, I'm just going to say it. This... thing with the red and the tentacles is either a clone of Trace, or something he conjured to keep track of Saria's soul.

Now that I wrote it down, it seems like whatever this thing is might be Rose's counterpart, like the living half for the everyday stuff and the corrupted half for dark casting. Seems like a Dark Trace thing to do.
Gearhead in the digital world, who will probably grow up to be a very grumpy old man.
Top

And suddenly why Trace went after Maren despite still being madly in love with Saria makes a lot of sense.
Gentlementlemen
How do you get to the Rakdos Guild Hall?
You take the psycho path.
Weed la Weed Warning: WEIRD
Top

Seriously, even with my heightened ability to analyze probability based on surrounding events and determine a number of possible outcomes to a given scenario, there is no conceivable way this can end well.
Maeve is so cute, they're thinking of renaming the ability known as Cute Charm, so it becomes "Maeve Charm."
Top

Omg I did not see this coming. I’m suddenly getting horror movie vibes...
Top

well, i think we all knew something was going to happen. i guess a bit of story progression works better than a cliffhanger scene change.

and yeah, it makes Trace's 'dating' of Maren take on a different, more sinister context. though i wonder if the appearance similarity is coincidence, or if Maren actually was related to Saria in some fashion. do we know anything about Maren's family?
Top

tony1695 wrote: ↑Sun Jan 26, 2020 2:45 amAnd suddenly why Trace went after Maren despite still being madly in love with Saria makes a lot of sense.

It seems like by the end of it all, Trace had gone off the deep end entirely.
Top

Who or what is talking though?
Top

at a guess, the teleport table just went into reverse, and is going to port Maren to that off-limits area.
hopefully the fact that Rose now has her limiters removed means she'll be able to find and help Maren.
Top

Who or what is talking though?

For Halo fans out there a quote springs to mind for me... maybe for you too.

“We exist together now, two corpses in one grave...”

Now who is this combinant entity? Parts of a single person? It sounds like a third party... the way it’s talking about serving its purpose carrying out the plan.

Rose as we’ve seen her so far is very much her own genuine personality as far as we know... she feels affection for Raine and carries on like she is intact (though she did that one time ask if the her she was being addresed as is ‘me’,foreshadowing potentially existing among other(s)). Maybe she has knowledge of them, she seems to be compartmentalized to herself though enough to be “whole”, but is able to “feel” around the estate like they can.

I feel as though things could get... interesting for Rose being trapped “in” the estate with it. Interestingly, she potentially refers to what we can assume is this shadow creeper as “that thing”. Something worthy of abject derision. So she’s aware of freakiness afoot, and yet is repulsed by it...being part of it. Unless she’s that well manipulated to not recognize herself as part of “it”. Though in all of this we do know Trace was fond of his death ribbons.

I still think that whatever is powering the estate needs immense magic capacity/skill. I STILL question what became of Trace’s Master Mage. He could very well still be serving his master.

If there’s two voices to this entity, is there a third “Kevin” persona? Weak point REVEALED xD

OHMAIGAWD. No, this is not what I wanted!!
Non nobis, Domine. Non nobis sed nomini tuo de gloriam.
Top

At least for today we have the comfort of the Natani x Keith snugglemuffins in the left sidebar to warm our hearts.