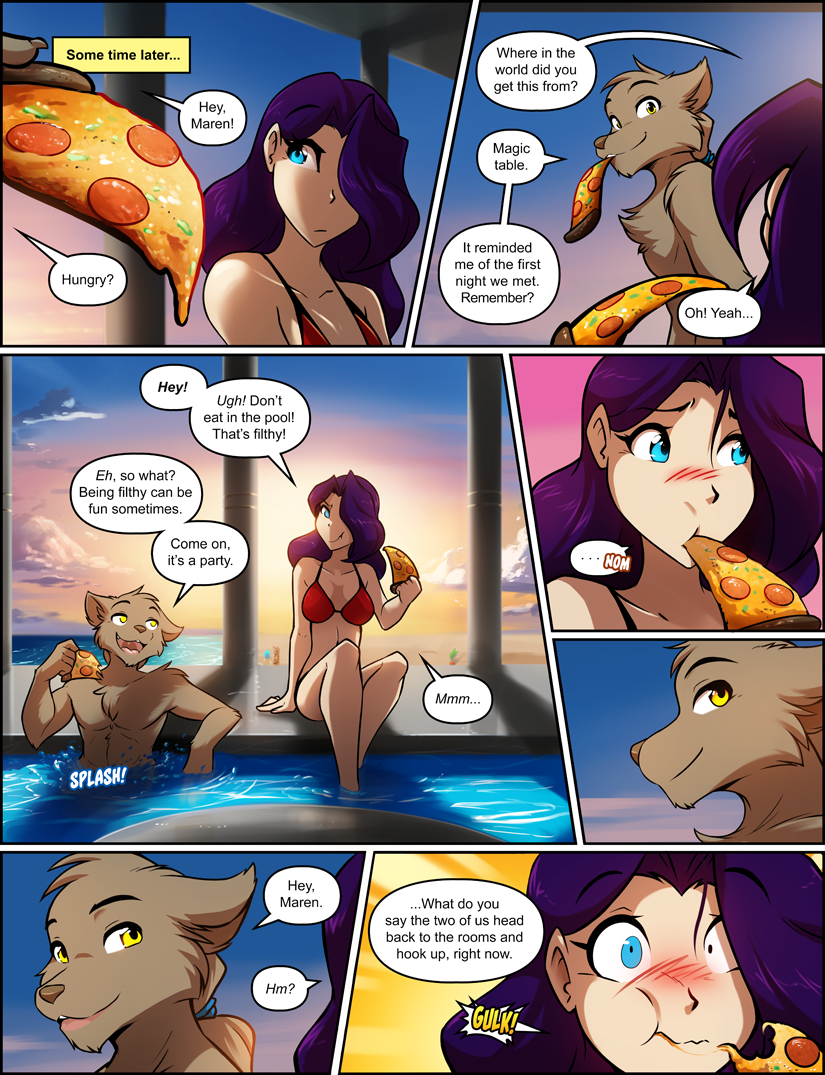 Didn't see that one coming.
Top

It doesn't really matter what kind of pepperoni pizza it is.

Damn, that guy's got some nerve. So casual about it too. Well, I suppose to him, it would be, given keidran culture on the matter...

And if not, Maren has the chance to finally properly relax since the town burnt down.

Wonder how she'll shoot him down. Either way, this will be quite an interesting interaction.
Gearhead in the digital world, who will probably grow up to be a very grumpy old man.
Top

On the other hand, Maren might agree that being filthy (in other respects) can be fun sometimes.
Top

Well thanks sythe you just doomed your group to disaster before we get an answer. That's the way these stories go. Besides what does he have to loose, I'm sure that's why he went with the keidran swim suit, advertising what's available.

Also, totally gave her the slice of pizza beforehand on purpose

That surprised me in the best way

Damn Sythe, you've got major balls to just come out with that.

inb4 Maren cuts them off.
Top

Wow, did not see this coming. Is it April fools?
Top 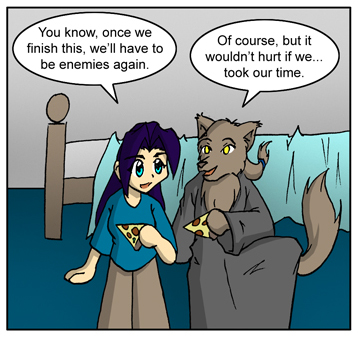 ...and took his time he did, xD. Current page is practically 2nd date!

Yes, Keidran view relations much more as a standard social affair. Being a former diplomat, he’s probably used to being... quite the socialite.

Though, I’m thinking Sythe is partially forgetting who he’s talking to. The alcohol is probably helping with that, which I think is most evidently still a factor in panel 3. Look at those ears at odd angles! Eyes a bit distant. Certainly still feeling a bit fuzzy behind the eyes, and... everywhere else for that matter.

The only way this proposition gets better is if Sythe turns to Mike (who’s been sitting nearby in disbelief trying desperately to disappear) and goes, “Hey there scamp, you wanna tag along too?” meanwhile Maren stalks closer to drown the boisterous boy.

In December? I doubt it. Though he might be teasing her, his expression says otherwise.

Another distinct possibility. He was drinking, after all. I tend to doubt it, though. While he does seem that way, remember back at the hot spring, when he was talking to Red about Raine? He had that same Smooth Operator look on his face. Might just be his normal relaxed persona.

And the ears at different angles? His head is tilted, and he's sitting on a pool with pizza. Mine would be too.
Gearhead in the digital world, who will probably grow up to be a very grumpy old man.
Top

Another distinct possibility. He was drinking, after all. I tend to doubt it, though. While he does seem that way, remember back at the hot spring, when he was talking to Red about Raine? He had that same Smooth Operator look on his face. Might just be his normal relaxed persona.

Yeah! No, he definitely seems to be forward and charismatic by nature. Just that it’s probably helping the situation a bit. There is a difference between “guy talk” and acting on it, takes a bit more nerves... or lack thereof. xD

I think he’s dynamic enough to handle any outcome after such a heavy wager placed here. I sense that if she outright says no it could lead to more poignant conversation. Help build toward something more intimate, from a human perspective.

Of course Sythe could, judging by the immediate facial expression but before a firm “NO” can even completely leave her lips, vault the pool wall in a single leap with a “hAROooOOOOooo~” and begin running naked as the jaybird he is off into the sunset.

Weird things are happening in this room of illusions.

Dunno if its on purpose, but Maren's left eye is missing the iris in the last panel
╔═╦╗╔╦═╦═╦╗╔╗
║═╣║║║╔╣╔╣╚╝║
║╔╣╚╝║║║║╚╗╔╝
╚╝╚══╩╝╚╝♥╚╝
And in the end, we were made to be apart
Like separate chambers of the human heart... ♫♪
Top